Loaded potato skins needn’t be loaded with fat. This version includes leeks to help with your SixFix. Perfect comfort food for a wet autumn evening!

Turn oven on at 180 degrees C and pop potatoes in straight way. Bake for about an hour, until soft when squidged.

Meanwhile, spritz a non-stick frying pan with spray oil and heat. Add the leek and fry until soft and light brown.

Line a small baking tray with baking paper and lay the prosciutto on the paper. Place in the oven with the potatoes and cook until crisp (keep an eye on it as it will soon go from crisp to burnt).

Place the leeks in a bowl and crumble in the ham. Add the grated cheeses and pepper.

When the potatoes are cooked, halve them lengthways and scoop out the potato. (Use a tea towel or folded kitchen paper to hold the potato to avoid burning your hand). Place the skins on the tray the ham was cooked on and pop back in the oven for a couple of minutes to crisp up.

Mix together the potato with the other ingredients in the bowl. Remove the skins from the oven and fill with the potato mixture. Place back in the oven for 5-10 minutes to brown.

Serve with the mixed salad.

About the Author: Jon

Clare's husband and the webmaster for www.SixFix.co.uk. I suppose you could also throw in cheif tester of all the great food Clare cooks to the mix! 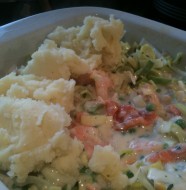 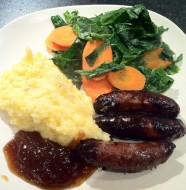 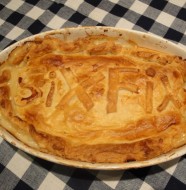